Delaware Division of the
Public Advocate 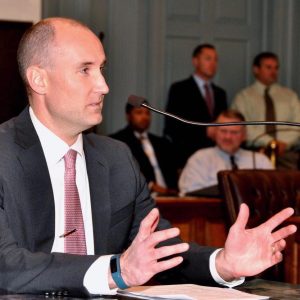 Andrew C. ‘Drew’ Slater was appointed by Governor Carney and confirmed by the Senate as the Public Advocate on January 25, 2017. The Public Advocate’s role is to advocate for the lowest reasonable rates for consumers consistent with the maintenance of adequate utility service and principally on behalf of residential and small commercial consumers. He also can, at times, advocate for commercial and industrial consumers. He appears before the Public Service Commission, State of Delaware courts, Federal courts, and Federal administrative and regulatory agencies on behalf of the interests of consumers regarding rates, service, and practices of public utilities.

In his role as the Public Advocate, Drew serves on the executive committee of the National Association of State Utility Consumer Advocates (‘NASUCA’), GTI Public Interest Advisory Committee, Board of the Sustainable Energy Utility, a.k.a. Energize Delaware, Renewable Energy Task Force, National Association of Regulated Utility Commissioners (“NARUC”) Subcommittee on COVID-19, and several other organizations.

Before joining the Division of the Public Advocate, he served the public as Kent and Sussex County Coordinator for Congressman Carney. In that role, his major responsibilities included representing the Congressman at meetings and events, and being the liaison with the public on a multitude of issue areas.

He began his career in public service in 2003 as an intern for U.S. Senator Joe Biden on the Foreign Relations Committee. From 2004-2013, he worked in the Delaware State Senate. During his time in the Senate, he worked for six legislators and assisted them with legislation, committees, and constituent service.

Drew graduated from Washington College in 2005 and received a Master’s degree from Wilmington University in 2011. He lives in Camden with his wife Laura, and two children.